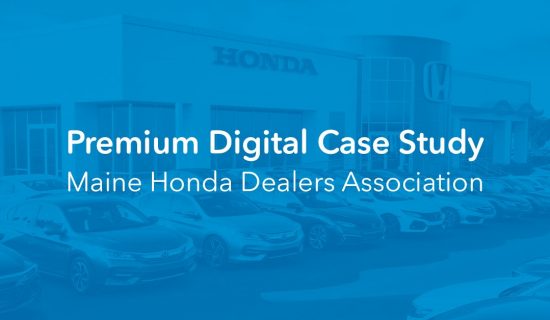 The coronavirus pandemic and the stringent measures to curb it had a devastating impact on the automotive industry. In April 2020, the first full month of pandemic restrictions, nationwide sales dropped to 8.8 million vehicles, mirroring numbers from the Great Recession.

In Maine, the circumstances were no different. Gov. Janet Mills declared a state of civil emergency in mid-March 2020. The state’s economy saw a significant slowdown as a result of the pandemic. In April 2020, sales and use taxes for transportation vehicles dropped 27%, after showing increases in the previous three months.

Although showrooms reopened on May 1, 2020 under strict health restrictions, many people remained reluctant to go out in public, especially in larger cities. Berlin City Honda and Prime Saco, located in the Portland metro area, were no exception to this and saw drastically reduced results compared to the other dealers within the Maine Honda Dealers Association (MHDA).

With the massive shift to internet and phone sales in April, the association faced the challenge of educating in-market consumers on showroom and service hours, statuses and their options.

During the summer of 2020, Tier10 developed a new premium digital campaign with the goal of reaching in-market shoppers with messaging that aligned with their behavior. The campaign included messaging such as “Bring the test drive to you” and “Keeping you safe” for consumers in the “only leaves home for essentials” and “stays home” category, and “We’re open” to those that were still going about their daily activities and going into public. This strategy was layered into the association’s premium digital buys as well as PPC and creative assets.

The agency partnered with NinthDecimal* and Tremor Video to refine the strategy.

NinthDecimal reported the following weekly avails for Portland, ME:

Using Tremor’s innovative video technology coupled with advanced data, Tier10 was able to deliver its messaging across all screens with engaging creative.

In the first week of the campaign, the targeted “Daily Activities and Going Out” shopper campaign delivered 39,426 impressions on CTV, a CPM of $25.46, and a completion rate of 70.1%.

To achieve more scale, Tier 10 opened the premium digital campaign up to all platforms, increasing the targeted active in-market shopper impressions to 352,736 with a CPM of $15.51 and a 96.5% completion rate.

Tier10’s strategy helped the Maine Honda Dealers overcome challenges posed by the variety of consumer responses to the pandemic.

*Ninth Deciminal was purchased by InMarket.