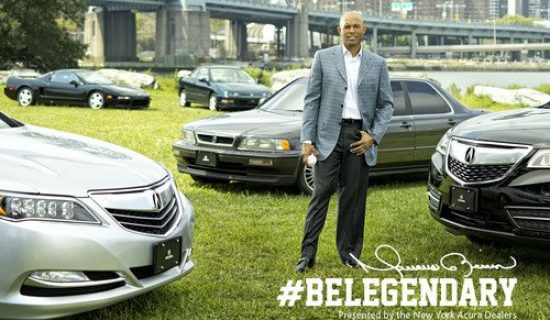 New advertising campaign for the New York market is part of a partnership that has contributed $800,000 to the legendary pitcher’s foundation.

NEW YORK, Sept. 23, 2013 /PRNewswire/ — New York Yankees pitcher Mariano Rivera, who is in the final days of his final regular season, will be the focal point of a new advertising campaign for the New York Acura Dealers. The multi-platform campaign, titled “Legends,” is part of a partnership between the Mariano Rivera Foundation and the New York Acura Dealers, which contribute $50,000 per month to the foundation.

“I’m very proud of this partnership with the New York Acura Dealers, and I’m thankful for their contributions to the foundation,” said Rivera, who will retire this season after a storied 19-year career.

The campaign centers on a series of television commercials, in English and Spanish, featuring the redesigned 2014 Acura MDX and the flagship 2014 RLX sedan, as well as cameos from iconic Acuras of the past: a 1991 Legend, 1995 Integra and 1991 NSX. The English version of the commercials also feature a voiceover from Brooklyn-born actor Steve Schirripa, best known for his role as Bobby “Bacala” Baccalieri on the HBO hit show “The Sopranos.” The spots were written and produced by Washington D.C.-based advertising agency Tier10 in conjunction with production company 8112 Studios.

“The spots are a nod to Acura’s history and the years it overlapped with Mariano’s career,” said Scott Rodgers, co-founder and chief creative officer at Tier10, who developed the concept of the campaign. “The ads are specifically geared for Mariano, who interacts with the iconic Acuras while reflecting on the evolution of his legendary career along with the evolution of the Acura brand.”

“Acura has been a part of my life since I began my career, so I like how the campaign connects the new Acuras with the Acuras of the past,” said Rivera, who’s been a loyal Acura driver since 1995.

The commercials will begin airing in the New York market on Oct. 1, and can be viewed online at http://www.youtube.com/NYAcura. Tier10 also produced a web-only series of behind-the-scenes videos from the shoot, which is available on the New York Acura Dealers’ Facebook page.

The “Legends” campaign also includes a social media strategy and contest that utilizes the hashtag #BeLegendary on all platforms. Fans of the New York Acura Dealers’ Facebook page can enter the contest by writing a brief story about a legendary figure in their life including the hashtag #TellMoYourStory. The grand prize is a meeting with the legend himself.

“Cross-media frequency is a key part of our strategy,” said Scott Fletcher, co-founder and vice president of client services at Tier10. “People consume media in so many different ways, an integrated look and strategy that falls across all mediums is vital and necessary.”

The New York Acura Dealers began their partnership with Rivera and his foundation in April 2012. The Mariano Rivera Foundation supports children in need in the U.S. and abroad and has recently helped rebuild the century-old former Presbyterian Church in New Rochelle, New York.

“Mariano’s loyalty to the Acura brand and to New York makes him the perfect partner,” said Brian Benstock, president of the New York Acura Dealers. “We’re honored to have a living legend on our side and help his great cause.”

About Tier10:Tier10 is an award-winning advertising agency headquartered in the Washington, D.C. metro area with offices in New York and Miami. Tier10 has been recognized as one of the fastest-growing companies in the U.S. by Inc. magazine and The Agency Post. Tier10 specializes in the automotive vertical and develops industry-leading strategies for select global brands, musicians, athletes and feature films. For more information, please visit http://Tier10.com.