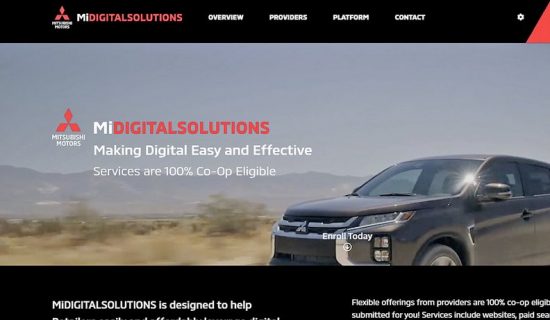 Mitsubishi Motors isn’t like other mainstream automakers in the U.S. — it’s smaller. With sales of just over 121,000 vehicles last year across about 350 stores, resources are tighter at headquarters and on dealership lots compared with bigger rivals such as Toyota.

But Mitsubishi has big plans as it adds franchises every month, revamps its facilities program and works with alliance partner Nissan on new generations of its crossovers.

A critical part of rebuilding the brand is the new “Small Batch” marketing initiative designed to reach customers through digital-first advertising. And now, Mitsubishi is making it easier for dealers to access modern ad tools in their local markets and bring that more-for-less approach to chasing after customers online.

The Mi Digital Solutions program, or MiDS for short, was launched in November and allows dealers to choose from five curated providers offering prenegotiated rates and 100 percent reimbursement through Mitsubishi’s co-op ad program.

The goal is to strip away some of the vendor clutter and allow dealers to join the cutting edge of digital retailing in an affordable and manageable way.

“Prior to this program launching, we were really only focused on what I would call the traditional elements of the Tier 3 program, which are leads and websites. So, it was pretty basic,” Kimberley Gardiner, chief marketing officer for Mitsubishi Motors North America, told Automotive News.

Gardiner took over as Mitsubishi’s CMO in January of last year after high-level marketing jobs at Kia Motors America and Toyota Motor Sales USA. She rolled out the initial Small Batch campaign for the brand nationally in June, starting with digital ads before expanding to video and broadcast. That same challenger spirit led to the development of the MiDS program at the local level.

Retailers now have Mitsubishi-supported providers offering website management, digital chat, text, data mining, lead generation and other services that are tied together rather than spreading them out across multiple vendors, sometimes with little accountability.

“We really wanted to help our dealers take their digital marketing and digital programming to the next level and couple that with Small Batch thinking, which is: You can be a small organization or a small dealer, but the things we can do can have a big impact,” Gardiner said. “They realize they want to make a change but don’t know where to begin.”

Early results are positive. About two-thirds of the brand’s U.S. dealers have signed up, page views at dealer websites are up by 30 percent, and the conversion rate on digital advertising has risen from 0.9 percent to 1.5 percent. That latter number looks small but marks significant progress, Gardiner said.

Providers in the new program offer a variety of options — such as “good, better, best” tiers — which makes it work for smaller retailers. It’s relatively affordable for the industry, and easy to pay for through co-op dollars, Gardiner said.

The solutions are also tailored for Mitsubishi stores rather than just copying other automakers’ programs. The Mitsubishi National Advisory Board helped shape the program.

“Especially with a challenger brand like ours, we need to really work hard on consistency,” Gardiner said. “At any moment in time, a consumer can have a really great experience or have a less than great experience that could really make or break as to whether they would even consider our brand.”

One satisfied subscriber to the Mitsubishi program is David Baum Jr., general manager of Lewisville Autoplex near Dallas. Baum added a provider for his Mitsubishi store — Team Velocity — that has brought several new tools for consumer engagement.

Baum and his team can now see users interacting with the website in real time, and tailor engagement to drive a service visit or a vehicle sale. Customers are given individual accounts and can receive digital coupons they can load onto their smartphones.

“In the past, I always had service coupons on my website,” Baum said. “But I can think of only a handful that were ever presented.” With digital coupons pushed to customers through their accounts and through email, “just last month, we had 286 coupons redeemed from service customers, and those were all Mitsubishis.”

Having Team Velocity within the MiDS program made it easier for Baum to pull the trigger on more digital engagement. Part of the reason is the packaging of several services handled by one vendor, and payment through the Mitsubishi co-op program.

“I’m always being pitched from different digital marketing companies, but the pricing is always through the roof, so we don’t even consider it,” he said. With his new Team Velocity account through Mitsubishi, “it’s point and click, and they’re paid and we’re done.”

One of Gardiner’s goals as marketing head is to align advertising with media use by consumers, meaning that as people spend more time online, retailers should shift their mix. Digital also allows for visibility on what’s working and what isn’t by tracking engagement.

Toward that end, Mitsubishi added digital consultants for the first time as part of the MiDS program.

They interact directly with dealers, giving them a digital assessment and action plan on how best to use limited advertising dollars and troubleshoot problems.