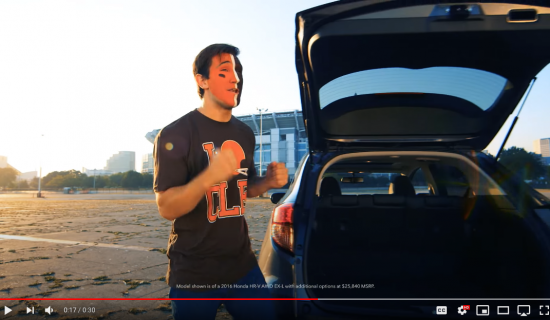 There’s plenty of NFL to go around.

While Hyundai’s big-ticket league sponsorship commands the biggest stage, dealers are creatively using the National Football League as a springboard for campaigns at the Tier 2 and Tier 3 levels — even if they don’t have massive ad budgets.

For example, ad agency Tier10, which devises campaigns for the Northern Ohio Honda Dealers Association, is tapping into the passionate fan base of the Cleveland Browns to push the Honda HR-V small crossover.

Tier10 released an HR-V ad in October pitching the crossover as the “perfect chariot” for game days. The spot, running on TV and online, follows a Browns fan who touts the features of the HR-V as he heads to FirstEnergy Stadium, the team’s home field.

The ad capitalizes on Cleveland’s football culture without Tier10 or the dealers having to pay the costly fees of a Browns sponsorship. The spot also appears on YouTube as a preroll ad for those in the Cleveland area who are searching for the Browns and other NFL video content.

Once fans get to the stadium to tailgate and watch the games, Tier10 makes sure Honda advertising tags along.

The agency uses Facebook’s hyperlocal targeting to place the ad on the newsfeeds of those who check in at the stadium. Tier10 uses this hyperlocal strategy on Facebook across all of its accounts for every NFL game.

There’s a conquesting component to this approach, too. While Ford has a sponsorship deal locked in with the Browns, Fletcher said, Honda can maneuver its way into the prime seats with its mobile efforts.

“We’ve got offers in the palm of their hands that are clickable to get to our mobile website,” Fletcher said. “And we’re doing that for $50 a game.”

The Automotive Advertising Agency — with a list of clients including Ford, Toyota, Lexus and Acura dealerships — posts on social media platforms in real-time during games and targets its TV ads by “cable zones” where its clients operate.

When the Houston Texans or Dallas Cowboys score a touchdown or make a great play, for example, the agency creates posts for its dealer clients that mention the highlight, said Marco Camacho, principal of The Automotive Advertising Agency, which is based in Austin, Texas, but has offices in Los Angeles and New York.

The agency has a trick for getting to viewers who catch up on a game they recorded on their DVRs, even if they’re zooming past the commercials.

Camacho says his agency places the logos of the dealer or dealer group and manufacturer along with a Web address on the upper third of the screen, choosing that spot because the bottom of the screen often is blocked during fast forwarding.

Camacho said his agency often incorporates football themes in its commercials. In one, the staff of a dealership goes to battle in a football game of their own. Camacho said the ads avoid using any NFL logos, but they often include cues that viewers can latch onto.

“You have to be creative,” Camacho said. “Depending on the market, you can incorporate similar colors, maybe some of the local sayings or things of that nature. The creativity part is also the fun part of it. What’ll happen is, when the consumer sees it, they’ll have that association already.”