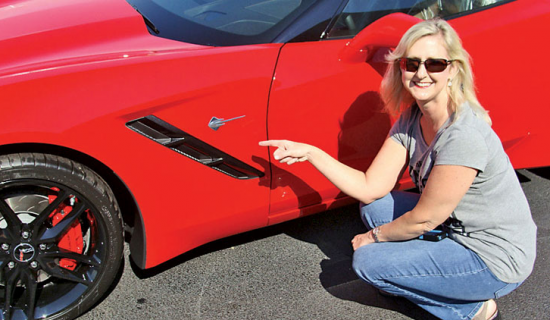 Consumers are traveling farther in search of the perfect car

After taking delivery of her torch-red 2014 Chevrolet Corvette Stingray Z51 at an Ohio dealership this month, Elizabeth Farrar had plenty of time to bond with it on the drive home.

That’s because she lives in Meridian, Miss., more than 700 miles away.

“This car’s kind of special, and I wanted to be the first one in Meridian with one,” says Farrar, a doctor and first-time Corvette owner. “We did everything over the phone, and when it was delivered, I booked a one-way plane ticket to Columbus and drove it back.”

Farrar said nearby dealers told her they wouldn’t get any Stingrays in stock for months, and a store she contacted in Atlanta demanded $5,000 more than sticker price. An Internet search led her to salesman Rick Conti in Pataskala, Ohio, where the only extra charge was the plane ticket. Conti’s dealership, Coughlin Chevrolet, even picked her up at the airport.

Consumers such as Farrar are increasingly traveling longer distances in search of their perfect cars and, more important, the perfect car-buying experience. Internet advertising enables dealers to connect with customers in outlying markets, and shoppers can easily compare stores’ inventories, prices and reputations.

For dealers, the downside of faraway buyers is that they are harder to profit from beyond the initial sale, with few likely to come back for service. And the logistics of working with them — whether it’s mailing documents back and forth or going so far as to deliver cars hundreds of miles away — can eat away at the already-thin margins many vehicles produce. Still, each long-distance sale represents incremental revenue and a step closer to hitting monthly sales targets, along with the potential for positive word-of-mouth that can drive more sales.

Jason Jager, who heads the industry relations group at Internet shopping site AutoTrader.com, says long-distance customers tend to be younger, more active on the Internet and more eager to write glowing reviews afterward. Others who see that a dealer has many positive reviews might also go out of their way to shop there.

“If a dealer is merchandising their vehicles well, pricing vehicles competitively and delivering on that promise, there’s really no end to the distance which car shoppers are willing to travel,” Jager says. “And it creates a halo effect because they’re going to be more likely to speak highly of that dealership.”

A follow-up study released this month found that buyers traveled an average of 10 miles more to buy a car advertised below sticker price than they otherwise would have and that a 10 percent discount would induce more than half of buyers to go at least 30 miles.

But Jager says most long-distance customers aren’t merely chasing the lowest price. He says that many just want a “fairly priced” vehicle from a store that shows it cares about the customer as much as the customer cares about finding the right vehicle.

The average distance that a buyer travels has risen steadily since the Internet became an important tool for many shoppers. Art Spinella, president of CNW Marketing Research, said consumers who research a new-vehicle purchase online now buy an average of 32.4 miles away, up from 21.1 miles in 1997. Buyers who don’t use the Internet stay slightly closer to home, traveling 24.1 miles now vs. 19.7 miles in 1997.

Because each used vehicle is different, their buyers tend to go even farther. For vehicles between one and three years old, Internet shoppers now buy more than 40 miles from home on average.

For some customers, the three closest dealers may have too many one-star ratings. Or perhaps a dealer an hour away has a car with the perfect combination of options, without any unwanted extras. Maybe a dealer two states away will deliver the car to the buyer’s driveway.

Remote delivery helps the Berlin City Auto Group sell 400 new vehicles a month from its two locations in Gorham, N.H., a town of 2,900 people in the White Mountains. So does a weekly catalog that is created in-house and inserted in about a million newspapers a month across northern New England.

Ed Watson, one of the group’s general managers, says only about one-third of the stores’ customers live within a two-hour drive. The group employs 40 part-time drivers and puts some 800,000 miles a year onto a fleet of “chase cars” that follow along when a buyer isn’t trading in a vehicle as part of a deal.

“You let us know what time you want us there and we’ll do the paperwork at your kitchen table,” Watson says. “It doesn’t really get any easier than that.”

In the early days of the Internet, long-distance sales fueled bad blood between dealers who used it to expand their reach and those who felt their territory was being invaded. A rural Idaho dealership that became the Dodge brand’s second-largest retailer in the mid-1990s sparked controversy over whether automakers should discourage or reward such tactics when allocating inventory.

Watson says Berlin City experienced some initial friction with nearby rivals but that it faded as long-distance sales became more common and accepted.

Today, the precision targeting that AutoTrader and other Internet shopping sites provide makes drawing buyers from afar even easier.

“Digital allows dealers to reach outside of their traditional geographic markets efficiently,” says Tim Schmidt, digital operations manager for Tier10 Marketing, an automotive advertising firm in Herndon, Va. “It might be too pricey to send mail, run TV, radio, print, etc. in those further markets, but in the digital space, particularly paid search, we are able to handpick the perfect prospects.”

Dave Dresser, a corrections department retiree, says he has bought or leased about 15 vehicles over two decades from Berlin City Toyota. The drive from his home in Morrisonville, N.Y., takes nearly four hours, including a ferry ride across Lake Champlain.

“I’m the type of person where if you treat me right I’m going to be loyal to you regardless of how far away it is,” Dresser says.

Conti, the Corvette salesman in Ohio, says 70 percent of his customers live in other states, even though he is more than 100 miles from the nearest border. Some choose to fly and pick their cars up at the dealership, while others pay to have them shipped to their home.

Source: https://www.autonews.com/article/20131019/RETAIL/310219854/consumers-are-traveling-farther-in-search-of-the-perfect-car
We use cookies on our website to give you the most relevant experience by remembering your preferences and repeat visits. By clicking “Accept”, you consent to the use of ALL the cookies.
Cookie settingsACCEPT
Manage consent