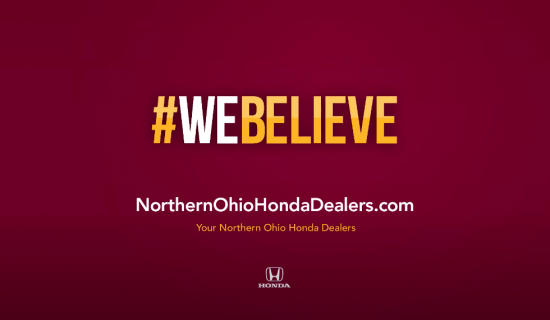 When the Cleveland Cavaliers were down 2-0 to the Golden State Warriors in the NBA Finals, and things looked bleak, ad agency Tier10 shot an inspiring spot for Ohioans about the power of belief.

Tier10, which handles regional work for the Northern Ohio Honda Dealers Association, capitalized on the gritty determination of a Cleveland fan base that hadn’t seen a professional sports championship in 52 years.

While it’s technically a Tier 2 ad, the spot’s inspiring tone gives it the range of a national Tier 1 ad. In fact, it feels like the sports version of Chrysler’s famous “Imported from Detroit” campaign.

In a script that resonates even more after the Cavs’ big win, the narrator declares, “It takes a city to raise a team,” and “It takes pain to push us farther.”

Although the writing sounds like it came from a homegrown, battle-tested fan, no Clevelanders were on the creative team. It just so happens that the Cleveland sports culture is rubbing off on Tier10’s creative crew. (The company has offices in Miami, New York City and Washington, D.C.)

“We’ve had this account for a while. When you spend enough time in the market, it’s hard for it not to ooze out and get into us,” Scott Fletcher, Tier10’s co-founder, told Automotive News. “Every time we have a meeting in market, no matter what sports season it is, all they talk about is sports. It is such an important aspect of the culture in Cleveland.”

The agency grabbed footage in downtown Cleveland near the Quicken Loans Arena when fans were hyped up for Games 3 and 4. Tier10 initially used the spot as a pre-roll ad that launched June 9 — a day before Game 4 — targeting those in northern Ohio who were searching for Cleveland Cavaliers or LeBron James videos.

The agency, which tweaked the spot in the following days, also geotargeted Honda owners in Cleveland and the northern Ohio region on Facebook. Tier10 said it aimed the spot at Honda customers going back eight model years as well as other import brand owners.

The agency says the Cleveland area is loyal to domestic makes, so it focuses its targeting efforts on import buyers. Going after a Ford owner in the region with Honda advertising in a conquest move isn’t a wise use of funds, Tier10 said.

Going further, the agency retargeted consumers on other websites who had been to the dealer association’s site. Tier10 then took advantage of the biggest stage by running the ad on TV before Game 7 in the region.

When creating the spot, Tier10 says, it played off the spirit of Cleveland sports fans, or “Believelanders.”

Now that the Cavs have won, will there be a triumphant follow-up ad? It could happen.

“I think as is, it still has a little bit of legs. We can tweak it or do a new variation. I think there will be something down the road for sure,” Fletcher said. “For this city and the people there, it is so big and important to them, and we want to obviously stay connected to it with Honda.”